Jesus of Nazareth entered Jerusalem riding on a young colt – as King David had done a thousand years before. Jesus was greeted by wildly enthusiastic crowds waving palm fronds, a symbol of royalty.
Did anyone stop to wonder what the Roman authorities would think, or how they would react? 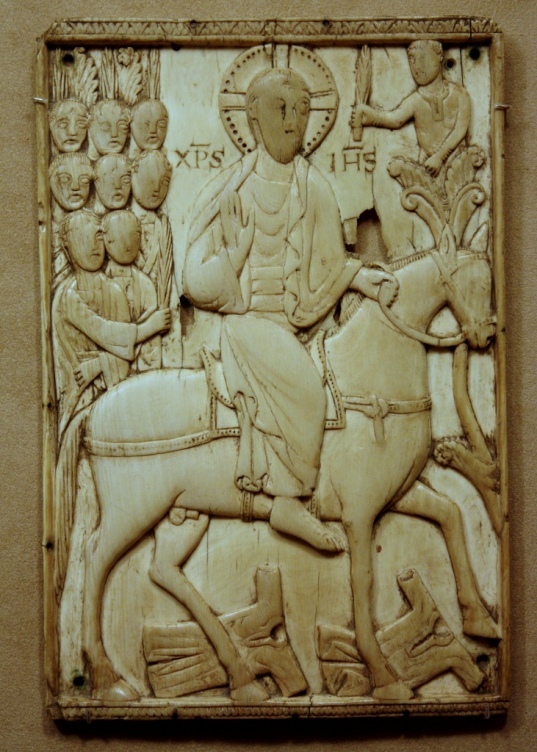 Entry into Jerusalem medieval ivory plaque. The name of the man who carved this strange, strange icon is lost to us. Who was he? We’ll never know. But the ivory surface, worn smooth with the kisses of Christians over many hundreds of years, tells us that his work was not in vain. Notice the garments beneath the hooves of the horse/donkey. The gospel says the people threw their cloaks on the ground in front of the donkey, as a mark of respect and jubilation. The garments here are jerkins rather than cloaks, but never mind – the thought is there… 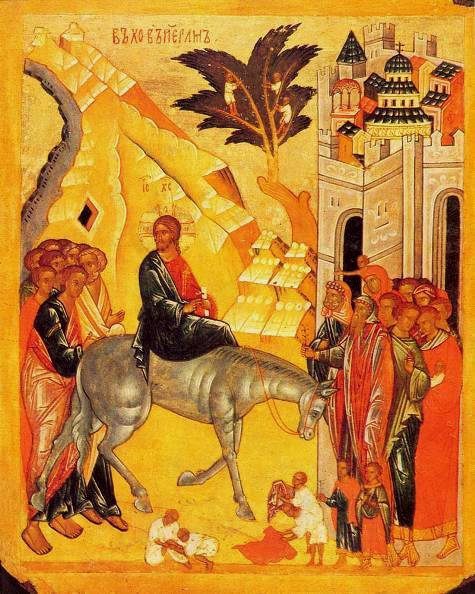 Gold is the color of joy and of kingship. Red is the color of triumph. But there’s black here too – the color of mourning, or death. The artist captures all this in one dramatic image, as the donkey approaches the dark gateways of Jerusalem. Why does Jesus look back towards his disciples/friends, rather than forward to Jerusalem? He knows, doesn’t he… 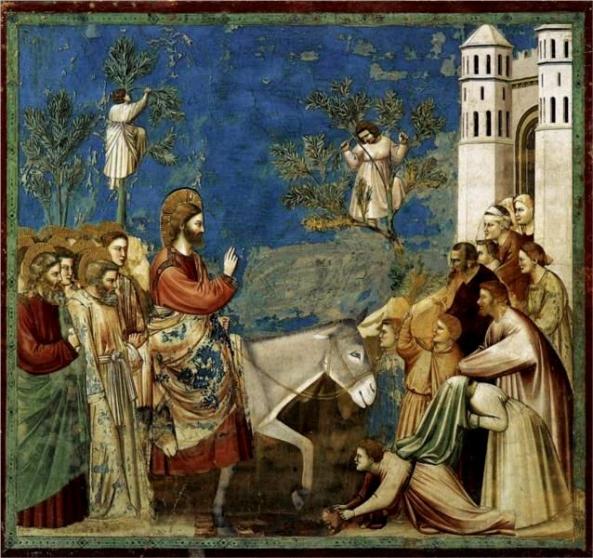 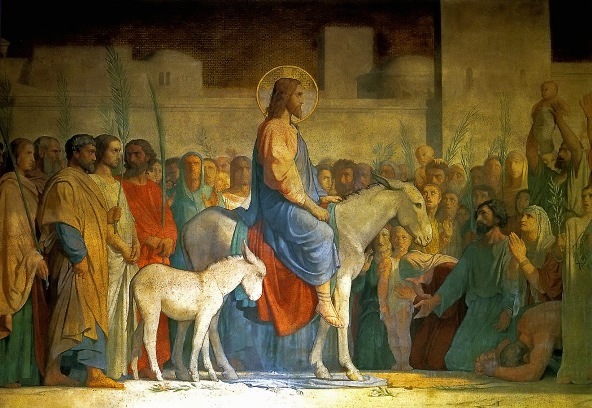 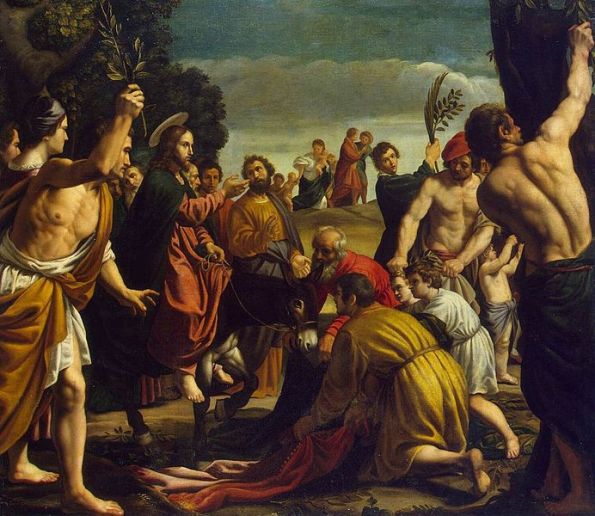 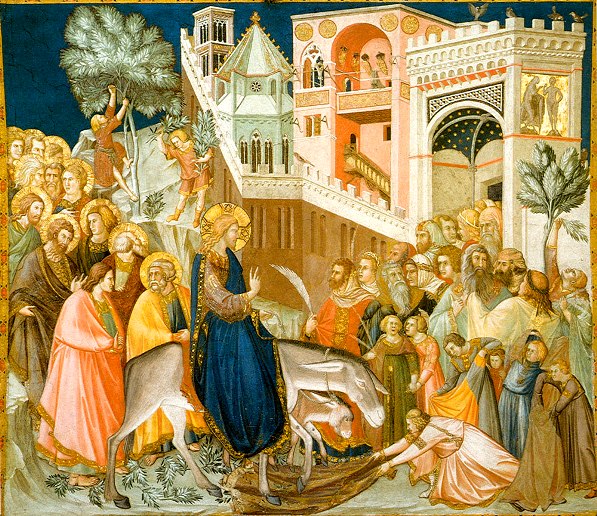 Entry into Jerusalem, the Assisi frescoes 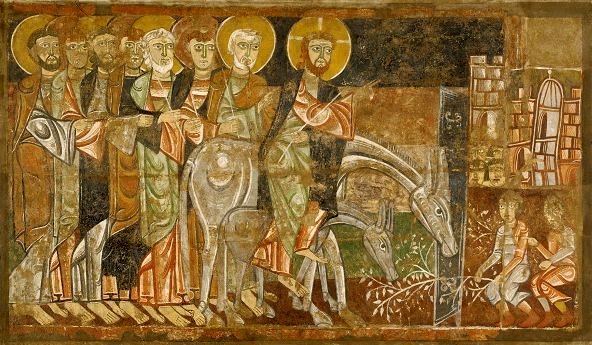 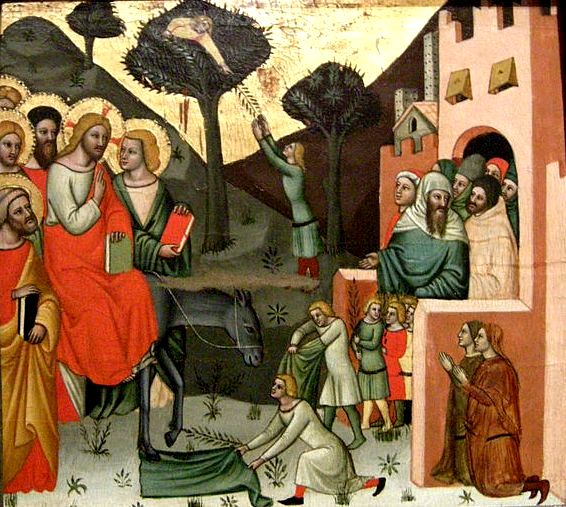 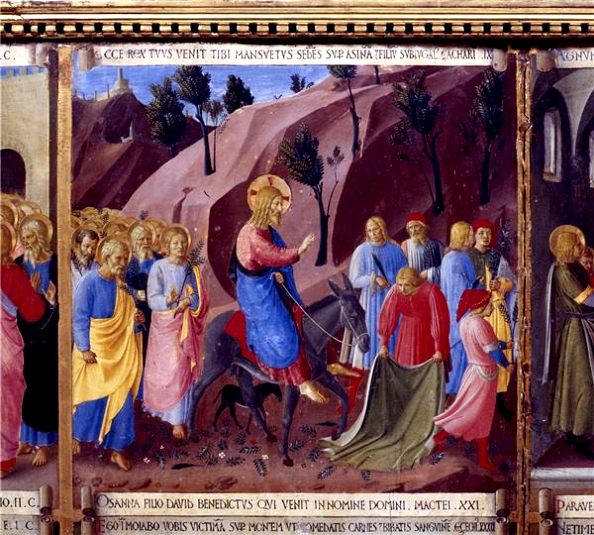 1 And when they drew near to Jerusalem and came to Bethphage, to the Mount of Olives, then Jesus sent two disciples, 2 saying to them, “Go into the village opposite you, and immediately you will find an ass tied, and a colt with her; untie them and bring them to me. 3 If any one says anything to you, you shall say, ‘The Lord has need of them,’ and he will send them immediately.” 4 This took place to fulfil what was spoken by the prophet, saying, 5 “Tell the daughter of Zion, Behold, your king is coming to you, humble, and mounted on an ass, and on a colt, the foal of an ass.” 6 The disciples went and did as Jesus had directed them; 7 they brought the ass and the colt, and put their garments on them, and he sat thereon. 8 Most of the crowd spread their garments on the road, and others cut branches from the trees and spread them on the road. 9 And the crowds that went before him and that followed him shouted, “Hosanna to the Son of David! Blessed is he who comes in the name of the Lord! Hosanna in the highest!” 10 And when he entered Jerusalem, all the city was stirred, saying, “Who is this?” 11 And the crowds said, “This is the prophet Jesus from Nazareth of Galilee.”

Mark 11:1-10
1 And when they drew near to Jerusalem, to Bethphage and Bethany, at the Mount of Olives, he sent two of his disciples, 2 and said to them, “Go into the village opposite you, and immediately as you enter it you will find a colt tied, on which no one has ever sat; untie it and bring it. 3 If any one says to you, ‘Why are you doing this?’ say, ‘The Lord has need of it and will send it back here immediately.'” 4 And they went away, and found a colt tied at the door out in the open street; and they untied it. 5 And those who stood there said to them, “What are you doing, untying the colt?” 6 And they told them what Jesus had said; and they let them go. 7 And they brought the colt to Jesus, and threw their garments on it; and he sat upon it. 8 And many spread their garments on the road, and others spread leafy branches which they had cut from the fields. 9 And those who went before and those who followed cried out, “Hosanna! Blessed is he who comes in the name of the Lord! 10 Blessed is the kingdom of our father David that is coming! Hosanna in the highest!”

Luke 19:29-38
29 When he drew near to Bethphage and Bethany, at the mount that is called Olivet, he sent two of the disciples, 30 saying, “Go into the village opposite, where on entering you will find a colt tied, on which no one has ever yet sat; untie it and bring it here. 31 If any one asks you, ‘Why are you untying it?’ you shall say this, ‘The Lord has need of it.'” 32 So those who were sent went away and found it as he had told them. 33 And as they were untying the colt, its owners said to them, “Why are you untying the colt?” 34 And they said, “The Lord has need of it.” 35 And they brought it to Jesus, and throwing their garments on the colt they set Jesus upon it. 36 And as he rode along, they spread their garments on the road. 37 As he was now drawing near, at the descent of the Mount of Olives, the whole multitude of the disciples began to rejoice and praise God with a loud voice for all the mighty works that they had seen, 38 saying, “Blessed is the King who comes in the name of the Lord! Peace in heaven and glory in the highest!”

John 12:12-15
12 The next day a great crowd who had come to the feast heard that Jesus was coming to Jerusalem. 13 So they took branches of palm trees and went out to meet him, crying, “Hosanna! Blessed is he who comes in the name of the Lord, even the King of Israel!” 14 And Jesus found a young ass and sat upon it; as it is written, 15 “Fear not, daughter of Zion; behold, your king is coming, sitting on an ass’s colt!”

Bible Art: Paintings from the Old and New Testament

The entry of Jesus into Jerusalem, first part of the Passion of Christ

Entry into Jerusalem –
what happened?