Other people in the story: Jesus of Nazareth, Peter

Who was the apostle Andrew?

Andrew is mentioned quite often in the gospels, but in a way that must have annoyed him: ‘Peter, and his brother Andrew…’. Always ‘and his brother Andrew’ following the name of the more high-profile Peter. You wonder if it ever bothered Andrew, or if he was used to being the tag-along.

The truth is that Andrew had quite a different personality to Peter. He was less impulsive, more approachable, a man who thought quite deeply. He had educated Greek friends who respected his opinion. Some of them asked to meet Jesus, and Andrew introduced them to Jesus and his ideas (see James Tissot’s painting of the scene at right). He may have been something of a quiet intellectual among the group of people who formed Jesus’ core supporters. 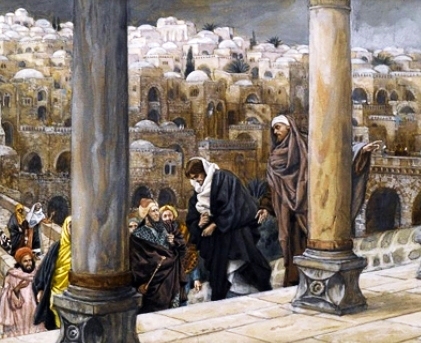 Andrew brings some Greeks to meet Jesus, painting by James Tissot His origins were humble. He was a fisherman who came from Bethsaida on the Lake of Galilee, but lived in nearby Capernaum.

But the life of a fisherman does not seem to have satisfied him, for he was also a disciple of John The Baptist, the radical preacher in the desert, who told him about Jesus of Nazareth and called Jesus the ‘Lamb of God’.

Andrew was a man looking for something more than the steady life of a fisherman. 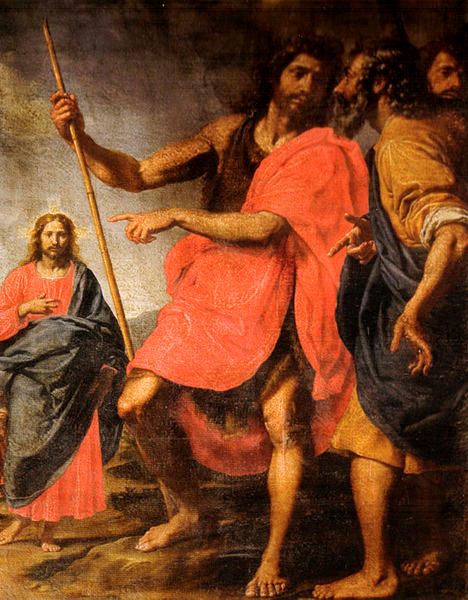 Intrigued, Andrew approached Jesus and soon became convinced Jesus was the Messiah. When Jesus later approached Andrew and asked him to join him in his ministry, Andrew readily agreed.

It is surprising that the gospels do not make more of Andrew, because he was the first to whom Jesus ‘stated his case’.

Jesus must have been fortified by Andrew’s belief in him when he underwent that life-changing event called the Temptation in the Desert. 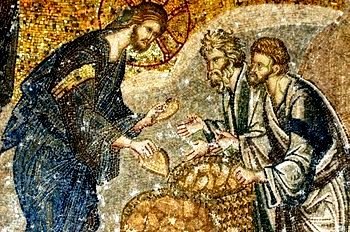 Mosaic showing Jesus with Andrew and PeterAndrew was perhaps the first to spread the Good News. He brought Peter, his brother, to Jesus (John 1, 35-44). The first two disciples whom John reports as attaching themselves to Jesus (Jn 1:35-42) are Andrew and another disciple – whom John does not name, but who is commonly supposed to be John himself.

Andrew then finds his brother Simon and brings him to Jesus. Because of this sequence of events, Andrew has been called ‘the Peter before Peter’ because he is the first (that we know) to bring others to belief in Jesus.

35 The next day John (the Baptist) again was standing with two of his disciples; 36 and he looked at Jesus as he walked, and said, “Behold, the Lamb of God!” 37 The two disciples heard him say this, and they followed Jesus. 38 Jesus turned, and saw them following, and said to them, “What do you seek?” And they said to him, “Rabbi” (which means Teacher), “where are you staying?” 39 He said to them, “Come and see.” They came and saw where he was staying; and they stayed with him that day, for it was about the tenth hour. 40 One of the two who heard John speak, and followed him, was Andrew, Simon Peter’s brother. 41 He first found his brother Simon, and said to him, “We have found the Messiah” (which means Christ). 42 He brought him to Jesus. Jesus looked at him, and said, “So you are Simon the son of John? You shall be called Cephas” (which means Peter). 43 The next day Jesus decided to go to Galilee. And he found Philip and said to him, “Follow me.” 44 Now Philip was from Beth-sa’ida, the city of Andrew and Peter. John 1:35-42

What sort of person was he?

Why was he among the first to follow Jesus? Because he had an enquiring mind. He was actively looking for the truth. He simply wanted to know.

This is why he took Jesus aside on the Mount of Olives to ask when the destruction of the Temple would occur.

Right from the start, Andrew appears to have been part of an inner circle among the disciples — only he and three others (Peter, James, and John) were on the Mount of Olives with Jesus when Jesus spoke about the coming cataclysm in Jerusalem: the destruction of the Temple and the apocalypse. 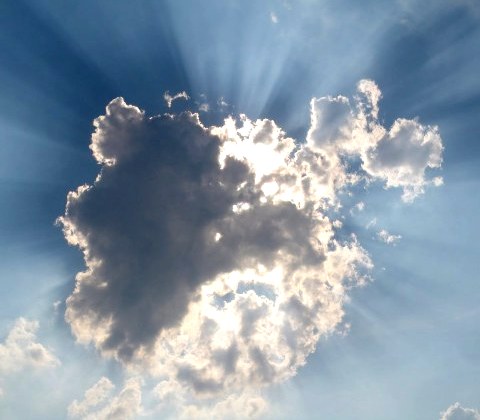 The miracle of the loaves and fishes

Andrew was also practical, and a problem-solver. It was he who brought the boy with the loaves and fishes to Jesus (John 6:8) ‘Here is a lad’ he says ‘with five barley loaves and two fish.” (John 6:4-14).

4 Now the Passover, the feast of the Jews, was at hand. 5 Lifting up his eyes, then, and seeing that a multitude was coming to him, Jesus said to Philip, “How are we to buy bread, so that these people may eat?” 6 This he said to test him, for he himself knew what he would do. 7 Philip answered him, “Two hundred denarii would not buy enough bread for each of them to get a little.” 8 One of his disciples, Andrew, Simon Peter’s brother, said to him, 9 “There is a lad here who has five barley loaves and two fish; but what are they among so many?” 10 Jesus said, “Make the people sit down.” Now there was much grass in the place; so the men sat down, in number about five thousand. 11 Jesus then took the loaves, and when he had given thanks, he distributed them to those who were seated; so also the fish, as much as they wanted. 12 And when they had eaten their fill, he told his disciples, “Gather up the fragments left over, that nothing may be lost.” 13 So they gathered them up and filled twelve baskets with fragments from the five barley loaves, left by those who had eaten. 14 When the people saw the sign which he had done, they said, “This is indeed the prophet who is to come into the world!” 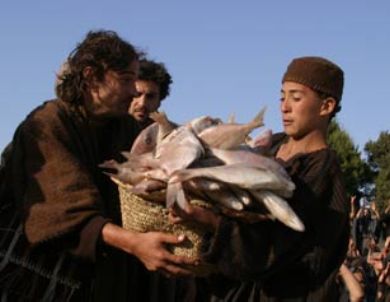 He also brought the enquiring Greeks to Jesus (John 12:20-26) in the tense hours before The Last Supper and Jesus’ arrest in the Garden of Olives. When a number of Greek Jews wished to speak with Jesus, they approached Philip and Andrew to introduce them to Jesus.

20 Now among those who went up to worship at the feast were some Greeks. 21 So these came to Philip, who was from Beth-sa’ida in Galilee, and said to him, “Sir, we wish to see Jesus.” 22 Philip went and told Andrew; Andrew went with Philip and they told Jesus. 23 And Jesus answered them, “The hour has come for the Son of man to be glorified. 24 Truly, truly, I say to you, unless a grain of wheat falls into the earth and dies, it remains alone; but if it dies, it bears much fruit. 25 He who loves his life loses it, and he who hates his life in this world will keep it for eternal life. 26 If any one serves me, he must follow me; and where I am, there shall my servant be also; if any one serves me, the Father will honor him.

This is an important point. Every time Andrew is mentioned as an individual, it is because he is bringing someone to Jesus. 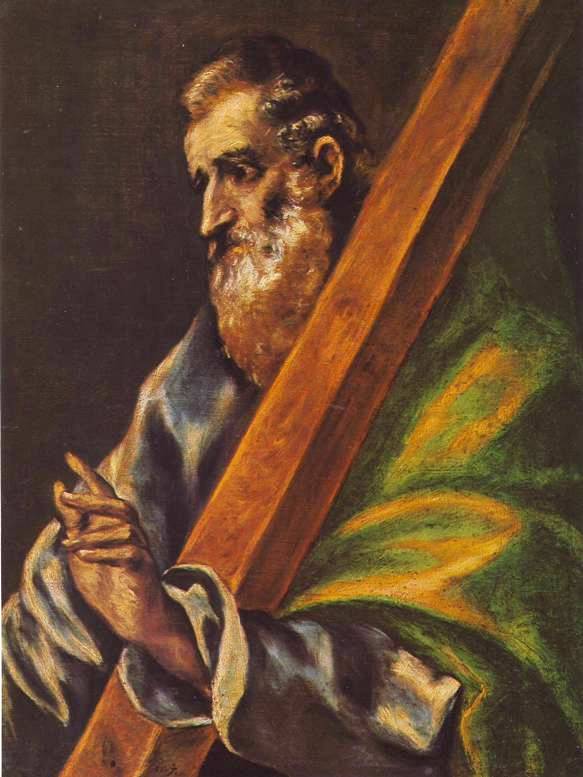 Like most of the other apostles, Andrew seems to have abandoned Jesus after he was arrested. But he returned, and was with the frightened group of disciples in Jerusalem after Jesus ascended to heaven.

12 Then they returned to Jerusalem from the mount called Olivet, which is near Jerusalem, a sabbath day’s journey away; 13 and when they had entered, they went up to the upper room, where they were staying, Peter and John and James and Andrew, Philip and Thomas, Bartholomew and Matthew, James the son of Alphaeus and Simon the Zealot and Judas the son of James. Acts 1:12-13

The death of Andrew

There is no mention of his death in the New Testment, but tradition has it that he was crucified at Patrae in Achaea on an X-shaped cross which has become the traditional St. Andrew’s cross. He had protested that he was unworthy to be executed on a cross that was the same shape on which Jesus died.

It is said he took two agonising days to die. 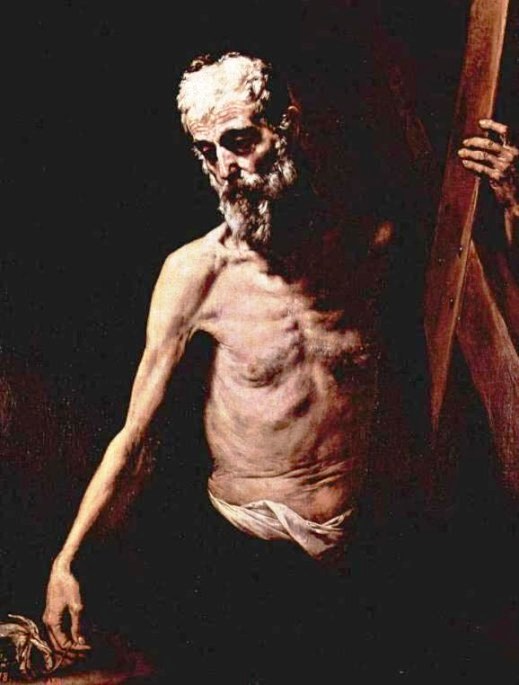 St Andrew the apostle and his cross, El Greco