In brief: Mary Magdalene was a disciple of Jesus of Nazareth, and probably his financial backer. It is extremely unlikely, well-nigh impossible, that she was a reformed prostitute, but medieval painters loved to show her as such. She was the first witness to the Resurrection, and is called ‘Apostle to the Apostles’, since the risen Christ told her to ‘go and tell’, apostellein in Greek. 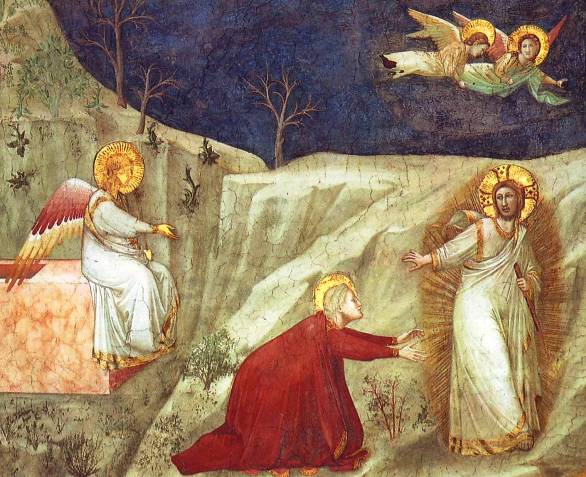 Giotto, Noli Me Tangere (‘Do not touch me’ )

Jesus appears to Mary Magdalene on Easter morning. She has at first mistaken him for a gardener, but when she realizes her mistake she reaches toward Jesus. Do not touch me, he says, for I am not yet ascended to my father. 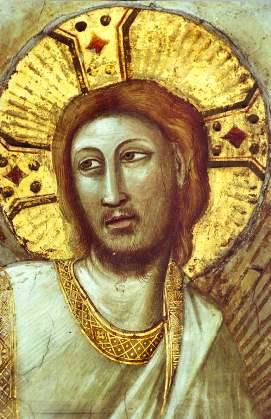 She is portrayed in two distinct ways: before her conversion she is richly attired, jewelled and gloved, a figure of Profane Love; as a penitent, she wears a simple cloak or is often naked, covered only by her long hair (a very popular theme during the Victorian period). She usually has a crucifix and a skull, and sometimes a whip and a crown of thorns. She reads or meditates or, in Baroque paintings, raises her tear-filled eyes towards a vision of angels in heaven.

An angel on the left sits rather casually on the side of the tomb, but the two above Jesus are closer to disembodied spirits – notice that though they have heads and arms, their legs are simply not there. Angels are not corporeal beings, Giotto reminds us. This heightens the sense that Jesus is inhabiting two worlds. Giotto emphasises the other-worldliness by giving Jesus a human appearance but encasing him in ethereal light and garments.

Mary, however, is decidedly not of another world. Her red, semi-transparent silk garment proclaims her as very much alive. 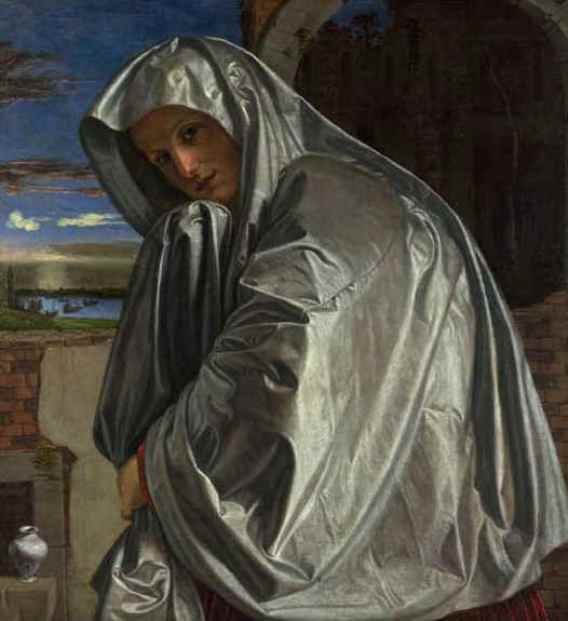 Mary and the other women (not shown by the painter) approach the tomb on Easter Sunday morning at dawn. They have brought spices and perfumed ointment to anoint the body of Jesus, but it is gone. Mary’s grief and confusion overcome her, and she weeps. Then she hears a sound behind her, and turns to look. What is behind her? It is very early in the morning, and at the left of the picture dawn is breaking over the horizon. But a much stronger light is coming from behind Mary’s left shoulder, making her cloak shimmer Savoldo suggests the light behind her is stronger than even the light of the sun – and of course the viewer knows that this light is Jesus, resurrected. Bible reference: John 20:11-16 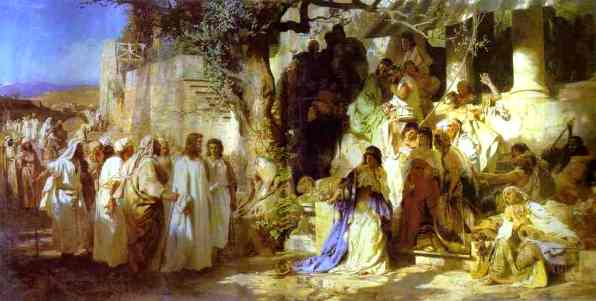 ‘The First Meeting of Christ and Mary Magdalene’, Henryk Siemiradzki,1873

Mary Magdalene’s sumptuous clothing and jewellery contrast sharply with the simplicity and dignity of Jesus. His gaze is direct, while she tries to hide herself in the shade. Behind him stand his disciples, straining to see how he will react. Behind her, on the other hand, are a band of reprobates who jeer at this provincial preacher. On the left of the picture, the simple countryside; on the right, ornate Roman architecture. This is a picture of contrasts, essentially a dramatic tableau showing a pivotal moment in Mary’s life. Bible reference: Luke 8:1-3 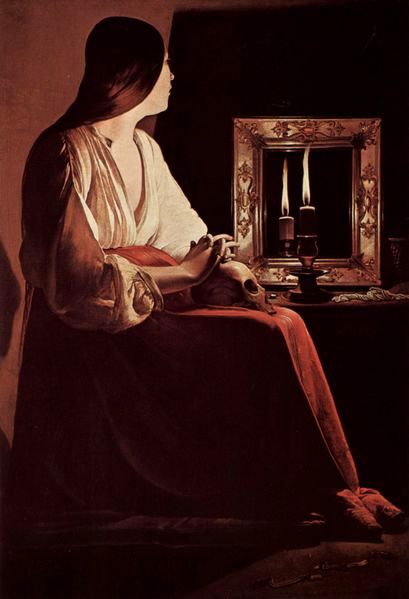 Mary surveys the mirror, symbol of her former vanity and preoccupation with worldly things. It casts a large shadow. Her beauty remains, but she has clearly become aware of the fact that there is more to life than earthly pleasure. Now, in the stillness of night, she reflects on past events, and on her own transformation through the encounter she has had with Jesus.

The skull in Mary’s lap reminds here that Death is inevitable for all creatures, and will come to her as well. It suggests that she should think about the hereafter as well as the present.
George de la Tour excelled in the use of light and shadow, and the meditative mood that night brings to all creatures. 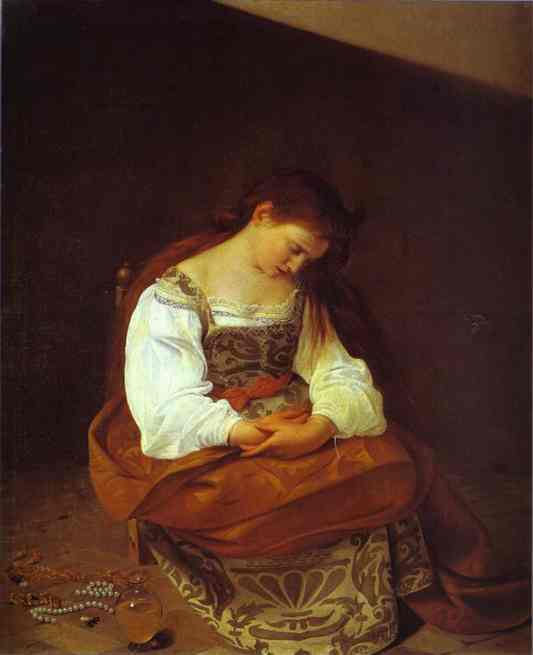 Caravaggio has managed to capture the image of a woman who has come to the end of the road, too tired to look into her future. This is the moment, he suggests, when she is ready to respond to Jesus’ message of redemption. Mary Magdalene is sumptuously dressed, but the discarded jewellery and her slumped figure tell the viewer that she has reached a turning point in her life. Caravaggio portrays her as a rich courtesan, not a common prostitute. In fact, the real Mary Magdalene was neither. She was not the sinner described in Luke 7:36-50, and when Luke does describe an actual prostitute in 15:30, he uses a different word, not ‘sinner’. 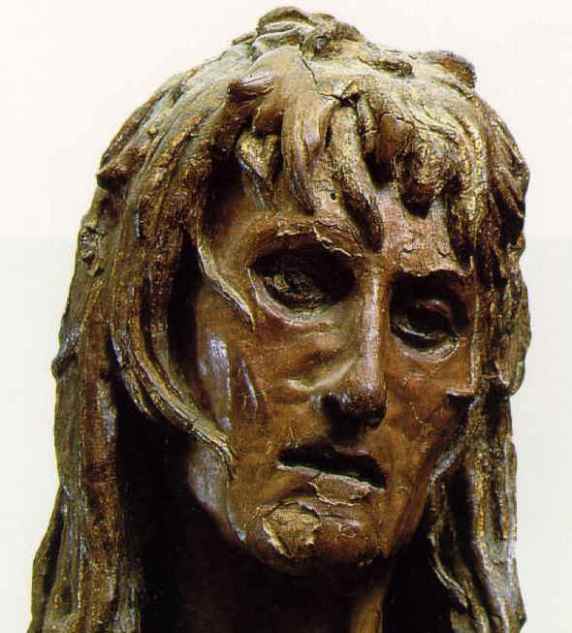 In popular legend, Mary Magdalene was portrayed as a repentant sinner who retired to a cave in the desert where she became a penitent hermit. She practised every sort of physical penance and privation, to atone for the sins she supposedly had committed before she was cured by Jesus. There is no biblical evidence for this depiction of Mary Magdalene. It derives from popular legend and medieval tradition only.

Donatello’s Mary has a thin, exhausted face and matted, filthy hair. Her emaciated body is clad in ragged animal skins. She is barefoot and bare armed. Her repentance is obviously sincere, but her self-abasement is not appealing. The sculpture is currently held in the Duomo Museum, Florence. It had become blackened by time, but after the terrible flood in 1966 it was cleaned and restored to its present appearance. 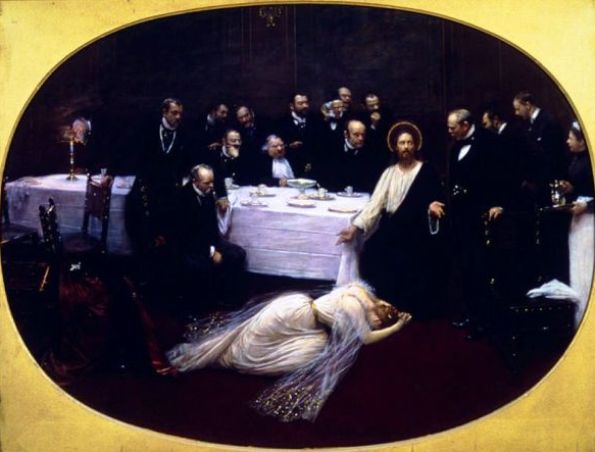 ‘Mary Magdalene in the house of Simon the Pharisee’, Jean Beraud, 1891

The story of the woman with the alabaster jar is transported into 19th century France. This interesting and technically accomplished painting pulls the event in Luke 7:36-50 into the modern world. Only the figure of Jesus is timeless. All the others, including the startled maid at far right, are in modern dress. The painting was controversial when it first appeared, because people rightly suspected that Beraud was trying to make them uncomfortable by confronting them with their own failings, their own hypocrisy. Many of the well-heeled men in the painting would have had mistresses. Now they were confronted with reality, with raw human suffering, and they did not particularly like it. Bible reference: Luke 7:36-50 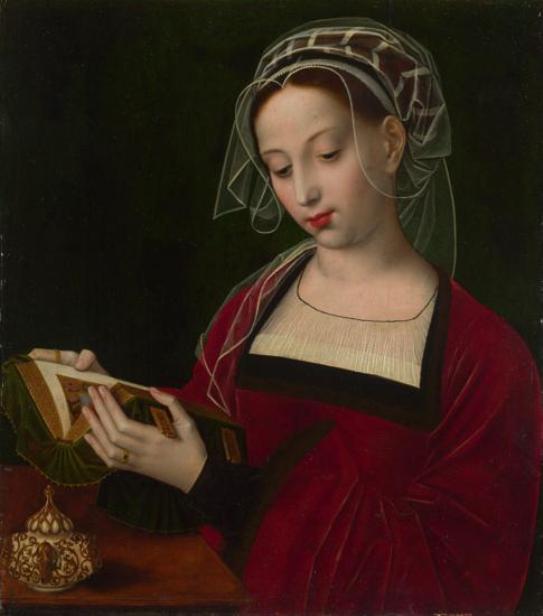 Mary, now repentant and reformed, sits quietly reading. Her life of sin is behind her.

As with many other painting of Mary Magdalene, this one contains a representation of an alabaster vase, suggesting that she is the woman who anointed Jesus with expensive perfume made from nard. The red of her dress and her pouting lips encourage the viewer to think of her as no better than she should be…. must have been popular, because Benson painted a v 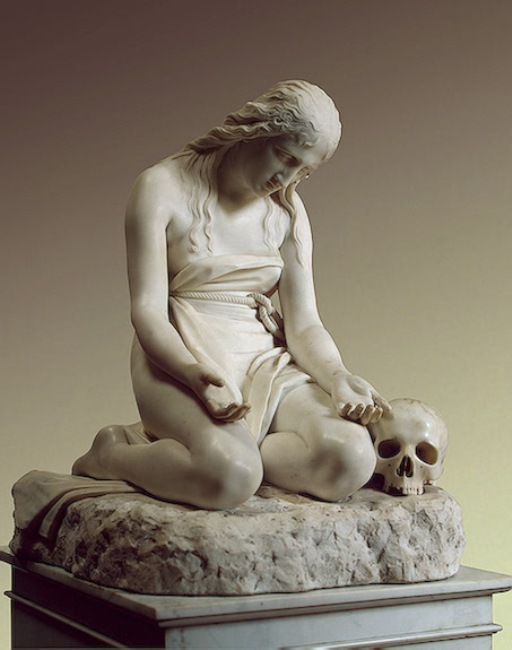 Mary alone in the desert, repenting her past sins. In the legends that grew up after her death, Mary is supposed to have repented after meeting Christ; she then spent many years in the desert, where she lamented her past sins. In keeping with this tradition, Canova shows her dressed in the clothing of a hermit. The skull beside her is a reminder of death, which must come to all. The figure of Mary once held a cross, symbol of the Crucifixion. She is clearly grief-stricken and helpless. There is no evidence for any of this in the New Testament.