The boy Jesus lost in Jerusalem

Mary and Joseph found the 12-year-old truant Jesus in the Temple complex, learning and debating in one of its schools for young men. Jesus saw the Temple as the home of his Father: even as a boy he was developing a new way of seeing God.

Passover was the greatest of the three festivals which all Jewish men had to keep in Jerusalem. Whole families and village groups traveled together to Jerusalem, swamping the capital with pilgrims – men, women and children. The city’s normal population was about 25,000. At Passover there were as many as 100,000.

People traveled in large groups for security. Women and children formed one group, men another. There was a certain amount of to-ing and fro-ing between the two groups, but people like Joseph and Mary could go a whole travelling day without seeing each other. 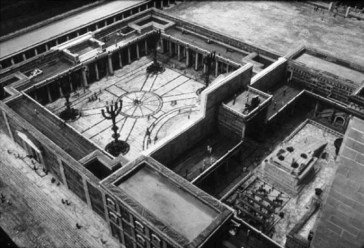 This particular year they brought Jesus with them for a reason: he had turned twelve, and was therefore counted as a man, no longer a child.

They say that the concept of childhood is a modern invention, but if you look at Jewish customs in biblical Israel you’ll see that there was a definite demarcation between child and adult. A child was a child until the age of twelve. Then he was an adult.

This is why the Finding of Jesus in the Temple marks a pivotal moment in Jesus’ life. He had been a boy; now he was a man.

With adult status, Jesus took his rightful place among the adults in the Temple. He was no longer confined to the Women’s Court (see the large open courtyard in the top left of the picture above) when he visited the Temple in Jerusalem with his family.

Now twelve years old, he moved naturally to the space reserved for men – the Court of the Israelites. He assumed the status of an adult man, with the particular responsibilities assumed by men. With these responsibilities went privileges, the first being his right to converse with the high-status scholars who dominated the Temple colleges for promising young men.

This was his first Passover in Jerusalem, and it was a happy time for all.

The parents go, the boy stays

Until things went wrong. When the caravan set out from Jerusalem to journey back to 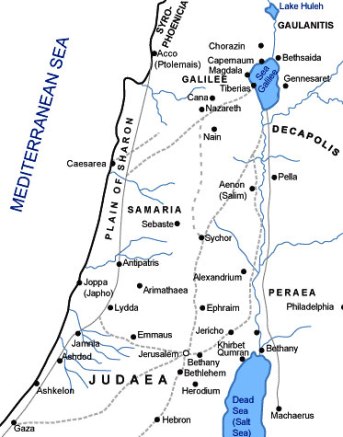 Nazareth, each of Jesus’ parents assumed he was with the other. Previously he had travelled with the women; now he was supposed to travel with the men. But as it happens, he was with neither.

His absence was not noted until the end of the day, when family groups of men and women assembled for the evening meal. Frantic with worry when they found Jesus was missing, Mary, Joseph and probably other family members set out to return to the city, to search for the young man. This would have taken a day’s travel, especially as they were moving against the flow of other pilgrims leaving the city. Jesus had now been missing for two days.

Jesus among the Temple teachers

It probably did not take them long to find Jesus – as parents they would have known his interests, and where he was likely to be. They found him in the Temple, almost certainly sitting in on one of the teaching seminars given at the schools/colleges for young men. 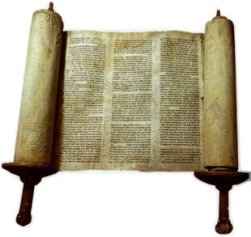 Somehow or other Jesus must have received a good grounding in Scripture studies in the Nazareth synagogue, and now he was in his element, a natural-born scholar in love with learning – especially the Jewish scriptures. The scholars in the Temple college were impressed by his unusual promise as a pupil, and apparently welcomed him.

Understandably, Mary and Joseph were relieved when they found him, though probably somewhat annoyed at Jesus’ assumption that they could have known where he was. When questioned, Jesus told his parents they should have known he would be in his Father’s house, i.e. the Temple. This answer seem to point to the fact that the young Jesus had already developed the idea of God as an intimate Father, something which went beyond the normal religious consciousness of a devout 1st century Jew. This innovative idea would shape his whole life and teaching.

Jesus returned to Nazareth with his parents, and lived out his adolescence there. He was a young man now, but he maintained the traditional attitude of respect and obedience towards his parents.

One interesting sentence from the gospel passage is often overlooked: ‘and his mother kept all these things in her heart’. Why is the mother mentioned, but not Joseph? Two points:

Joseph does not appear in later episodes of Jesus’ life; did he die young?

or it this sentence simply a tribute to the love of a traditional Jewish mother for her son?

What happened next? See Baptism of Jesus 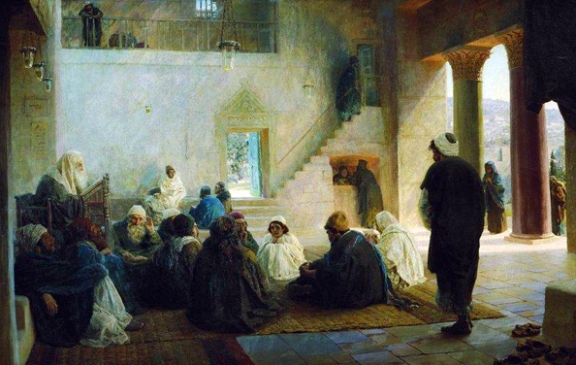 2. The parents go, the boy stays. Read the green text

3. Jesus among the Temple teachers. Read the red text

Luke 2:41-52 41 Now his parents went to Jerusalem every year at the feast of the Passover. 42 And when he was twelve years old, they went up according to custom;

43 and when the feast was ended, as they were returning, the boy Jesus stayed behind in Jerusalem. His parents did not know it, 44 but supposing him to be in the company they went a day’s journey, and they sought him among their kinsfolk and acquaintances; 45 and when they did not find him, they returned to Jerusalem, seeking him.

46 After three days they found him in the temple, sitting among the teachers, listening to them and asking them questions; 47 and all who heard him were amazed at his understanding and his answers. 48 And when they saw him they were astonished; and his mother said to him, “Son, why have you treated us so? Behold, your father and I have been looking for you anxiously.”

49 And he said to them, “How is it that you sought me? Did you not know that I must be in my Father’s house?” 50 And they did not understand the saying which he spoke to them. 51 And he went down with them and came to Nazareth, and was obedient to them; and his mother kept all these things in her heart. 52 And Jesus increased in wisdom and in stature, and in favour with God and man. 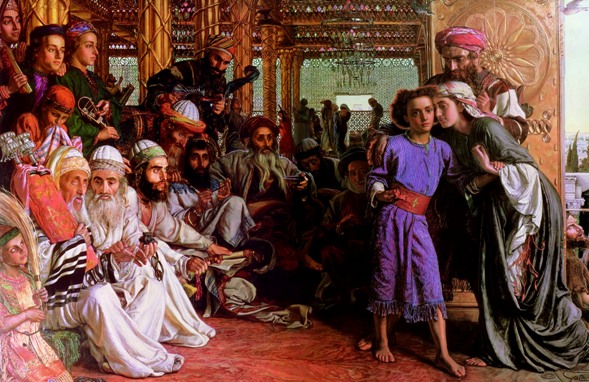 The provinces of Palestine