In brief:  Jesus returned to Nazareth, the town of his youth. He spoke in the synagogue, but the townspeople did not like what he said. They hurried him unceremoniously out of the town.

Nazareth would have looked something like thisNazareth is famous for one thing, and one thing only: it was the home town of Jesus. Here Jesus spent his boyhood living with his mother and father, and here that he faced the sceptical townsfolk of Nazareth.

The village seems to have been held in some contempt in 1st century Palestine – a nondescript dot on the map with not much to offer, overshadowed by nearby Sepphoris, the luxurious Greek-style capital recently built by Herod Antipas. It is beguiling to think that Joseph and Jesus, as builders, may have traipsed daily over to Sepphoris to work on the new city.

But time had passed. There was no mention of Joseph in the gospels at this point; it must be presumed that he had died (life expectancy was low) or was away working as an itinerant craftsman.

Mary may have been a widow; she seems to have been head of the family.

At first, a positive reaction

The adult Jesus must have returned to his village a number of times to see his family, but this time there was an incident recorded in all three Synoptic gospels (Matthew, Mark and Luke). 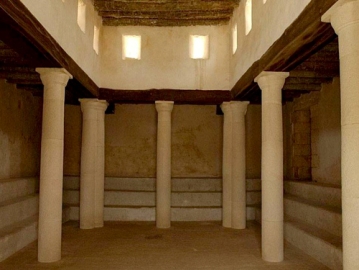 Nazareth could not boast many celebrities among its population so when Jesus, now a charismatic and famous teacher, returned home he was at first greeted warmly. He had left Nazareth as a private person; now he returned as a Rabbi, accompanied by scholars and disciples.

He went to the tiny synagogue. The usual service consisted of prayers, readings from the Law and the Prophets, and a sermon. Any competent man present could lead the service.

Jesus’ audience was at first impressed by what he said.

But then things turned sour. People took exception to the Scripture passage he chose – it was Isaiah 61:1-2:

The Spirit of the Lord God is upon me, because the Lord has anointed me to bring good tidings to the oppressed; he has sent me to bind up the broken-hearted, to proclaim liberty to the captives, and release to the prisoners; to proclaim the year of the Lord’s favour…

Having read through the passage, Jesus gave a discourse on what the words meant, and how they had now been fulfilled – in him. He made several points:

The people of Nazareth (and we may assume the synagogue was full) were startled at first, then hostile. They took exception to one of their own making such grandiose claims.

It may have been that, like many men whose birth was shadowed, Jesus had never been entirely accepted by the people he grew up with.

But someone in the congregation must have urged the others to give Jesus a chance. If he could show some tangible proof of his claims, then they would give more thought to the matter.

They had heard he cured the sick in nearby Capernaum. Let him do the same here in Nazareth.

Read the red text in Gospel passages at end of page

The effects of their unbelief

But Jesus was not a magician doing tricks to amuse the crowd. His miracles were vitally related to the faith and the moral condition of the person. Jesus could not perform a miracle for someone who was sceptical about his power and his identity. His miracles relied on

These were not present in the people of Nazareth, and the gospels record that Jesus ‘could do no mighty works’ at Nazareth.

The people of Nazareth turned on him and ran him out of town. One of the gospels says that, in the ensuing mêlée, the rougher element among the villagers tried to kill him. 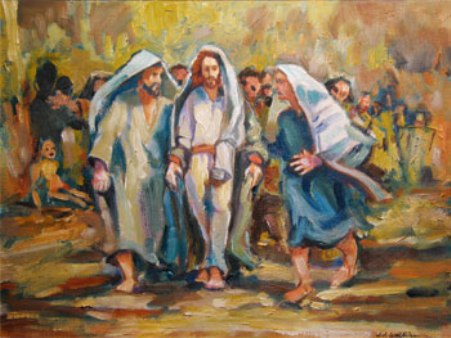 The painting by Jeff Watkins (above) shows the tumult of the moment, as Jesus is hustled and jostled out of Nazareth. The artist has captured the energy of the moment: Jesus is trying to leave, but is hemmed in and urged forward by the vigorous, angry men who abuse him. Are these the people he grew up with?

It was probably someone in this group who referred disparagingly to Jesus as ‘the son of Mary’ and ‘the carpenter’s son’ (see the passages from Matthew and Mark below). A Jewish man was normally referred to as ‘the son of (his father’s name)’, and we would expect Jesus to be called ‘the son of Joseph’. Calling him ‘the son of Mary’ implied Jesus could not even name his own father. 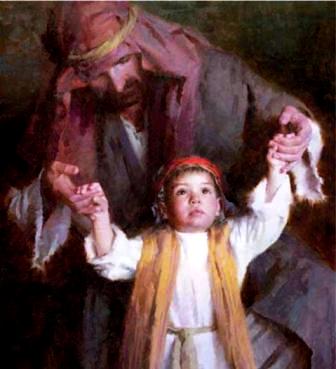 This particular gospel story was reassuring for the early Christians. They too were being rejected by their Jewish neighbours. They could take heart, as we can, from the fact that even Jesus was rejected by people he had known and trusted all his life.

The incident at Nazareth cannot have been a happy experience for anyone, especially Mary, who may have understood the villagers’ resentment but was forced to watch her son being vilified.

Read the black text in gospel passages at end of page

Extra information: the synagogue at nearby Capernaum 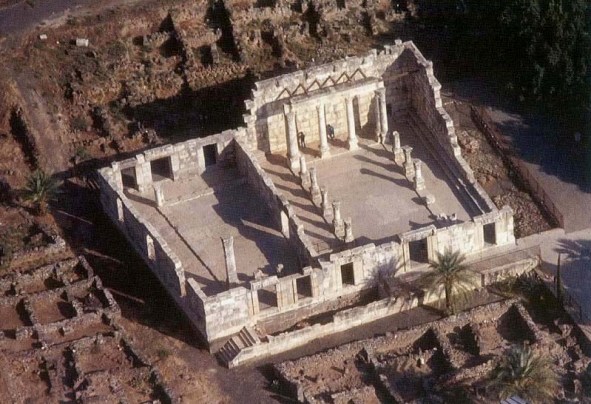 Excavated ruins of the synagogue at Capernaum

Jesus was based at Capernaum during his ministry to Galilee, but the synagogue pictured above is from a later century – Jesus did not teach in this building. However, the layout and floor-plan would have been the same:

This magnificent lime-stone synagogue was one of the largest and best-built of the Byzantine Period. Its walls, pavers and columns were made of white limestone from further west in Galilee, and contrasted sharply with the dark grey basalt stone of earlier buildings on this site.
The main room was flanked by two tiers of seats on the eastern and western sides, divided by two rows of columns.

Note: Jews at that time, before synagogues became popular, met in other places – an open square, a large house’s courtyard, an affluent person’s residence. Nazareth, poor as it was, may only have been able to offer this sort of setting to Jesus when he returned to his home town. The word ‘synagogue’ refers primarily to a gathering of people, and only secondarily to a formal structure – something that Jesus would have understood. 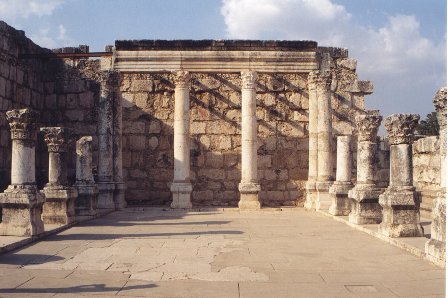 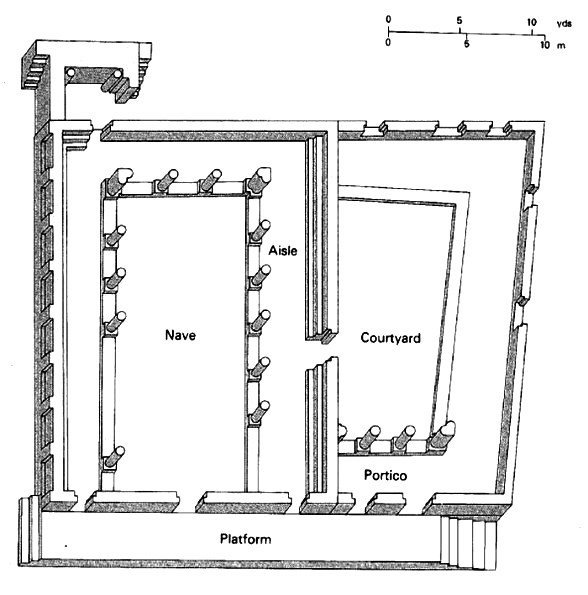 Plan of the synagogue at Capernaum. A synagogue at Nazareth
would have been smaller and more modest in design.

2. At first, a positive reaction. Read the green text

3. The effects of their unbelief. Read the black text

Matthew 13:53-58 53 And when Jesus had finished these parables, he went away from there, 54 and coming to his own country he taught them in their synagogue,

so that they were astonished, and said, “Where did this man get this wisdom and these mighty works? 55 Is not this the carpenter’s son? Is not his mother called Mary? And are not his brothers James and Joseph and Simon and Judas? 56 And are not all his sisters with us? Where then did this man get all this?” 57 And they took offense at him. But Jesus said to them, “A prophet is not without honour except in his own country and in his own house.”

58 And he did not do many mighty works there, because of their unbelief.

Mark 6:1-6 1 He went away from there and came to his own country; and his disciples followed him. 2 And on the Sabbath he began to teach in the synagogue;

and many who heard him were astonished, saying, “Where did this man get all this? What is the wisdom given to him? What mighty works are wrought by his hands!

3 Is not this the carpenter, the son of Mary and brother of James and Joses and Judas and Simon, and are not his sisters here with us?” And they took offense at him.

4 And Jesus said to them, “A prophet is not without honour, except in his own country, and among his own kin, and in his own house.”

5 And he could do no mighty work there, except that he laid his hands upon a few sick people and healed them. 6 And he marvelled because of their unbelief.

Luke 4:16-30 16 And he came to Nazareth, where he had been brought up; and he went to the synagogue, as his custom was, on the Sabbath day.

And he stood up to read;

17 and there was given to him the book of the prophet Isaiah. He opened the book and found the place where it was written, 18 “The Spirit of the Lord is upon me, because he has anointed me to preach good news to the poor. He has sent me to proclaim release to the captives and recovering of sight to the blind, to set at liberty those who are oppressed, 19 to proclaim the acceptable year of the Lord.” 20 And he closed the book, and gave it back to the attendant, and sat down; and the eyes of all in the synagogue were fixed on him. 21 And he began to say to them, “Today this scripture has been fulfilled in your hearing.”

22 And all spoke well of him, and wondered at the gracious words which proceeded out of his mouth;

and they said, “Is not this Joseph’s son?”

23 And he said to them, “Doubtless you will quote to me this proverb, ‘Physician, heal yourself; what we have heard you did at Capernaum, do here also in your own country.'” 24 And he said, “Truly, I say to you, no prophet is acceptable in his own country. 25 But in truth, I tell you, there were many widows in Israel in the days of Elijah, when the heaven was shut up three years and six months, when there came a great famine over all the land; 26 and Elijah was sent to none of them but only to Zarephath, in the land of Sidon, to a woman who was a widow. 27 And there were many lepers in Israel in the time of the prophet Elisha; and none of them was cleansed, but only Naaman the Syrian.” 28 When they heard this, all in the synagogue were filled with wrath. 29 And they rose up and put him out of the city, and led him to the brow of the hill on which their city was built, that they might throw him down headlong. 30 But passing through the midst of them he went away.

Mary of Nazareth
An extraordinary woman