Tag Archive for: Pierced with a spear

Jesus pierced with a spear 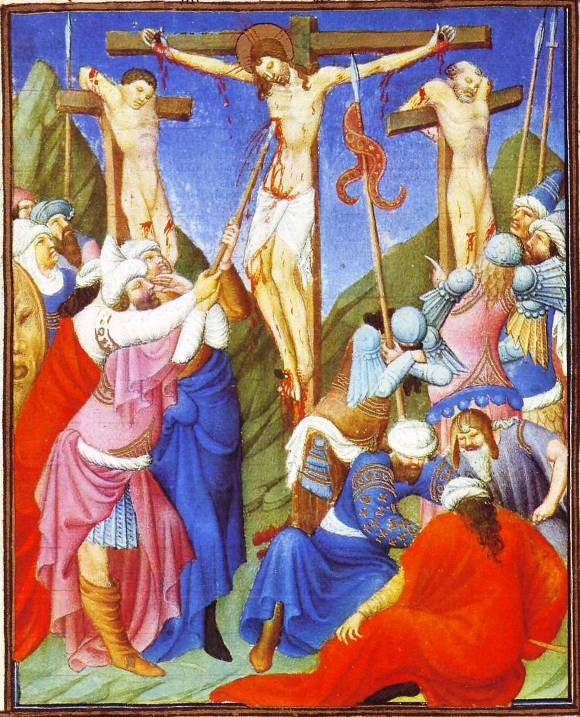 ”But when they came to Jesus and saw that he was dead already, they broke not his legs: but one of the soldiers with a spear pierced his side, and forthwith came there out blood and water” (John 19: 38, 84).

The followers of Jesus are not present in this scene. No doubt this would have been how it was, since they would have been intimidated by the presence of the brutal soldiers.

But Jesus himself is no longer plagued by the soldiers’ taunts. He is dead, and they are in the act of testing this by plunging a spear into his side. In a moment they will break the limbs of the two naked thieves crucified on each side of Jesus. 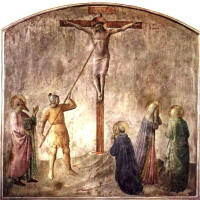 This incident was a popular subject at the time. Click on the thumbnail below to see an enlargement of Fra Angelico’s mural of this brutal moment.

The painter of the Book of Hours has incorporated an incident from the Golden Legend. Longinus, the centurion who pierced Christ’s side, suffered from a disease of the eyes. Here he raises his spear with lowered lids, and the hands of two comrades help to direct the thrust. His disease was cured by the blood that flowed from the wound.

One of the soldiers on the left side of the painting holds a shield in the form of a grotesque mask (see this same shield used in Soldiers at the Tomb). At the foot of the cross a guard leaning on his spear has turned away from the sight of the mutilated dead.

We are told that soldiers cast lots for Christ’s seamless garment, and here a group of three, oblivious of the scene behind them, could well be occupied with dice. One of them turns his back to the beholder.

The painter again employed his favored reds, pinks, blues, and yellow-browns. The blue tunic of one soldier bears small, sparkling golden motifs that give the ﬁgure a disproportionate prominence.