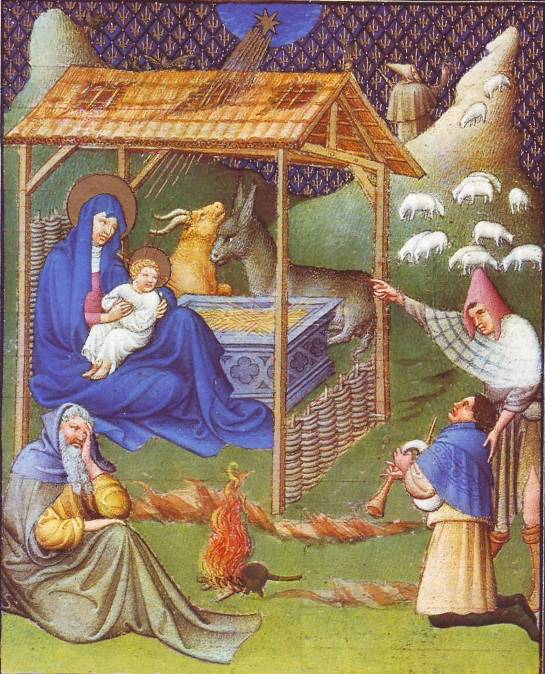 According to the Duke de Berry’s French version of the scene, Christ was born in a humble shelter, the sort of shed used in bad weather to protect beasts of burden. The thatched roof, which began to show conspicuous holes in paintings of this period, is here exceptionally dilapidated. This was no whim of the artist. The ruined buildings in paintings of the Nativity were meant to symbolize the ruination and end of older forms of religion, after the entry of Jesus into the world. You can see more about symbolism in paintings at 40 Paintings of the Birth of Christ.

Through the exposed rafters the rays of the miraculous star shine on the Virgin and her Child. Mary, lacking a bed, sits humbly on the ground beside the manger. After the birth of the Child, according to the Duke’s Meditations that accompanied these paintings, Joseph sat “quite dejected because he was unable to provide the Virgin Mary with everything necessary.” The text also says that, as a carpenter, he did what he could to enclose the place for her protection.

Here he rests his head pensively on his hand after having made a small fire to heat a pot and to check the chill of December. You can see this same idea expressed in the charming painting of the Nativity by Conrad von Soest, at 40 Paintings of the Birth of Christ.

Usually the Virgin is provided with at least a cushion or pad but here she lacks even this simple comfort. Instead, she leans against the wicker panel behind her.

In Italian paintings a kneeling shepherd is usually present. Here two shepherds, less important than the sacred figures and therefore smaller, already adore the newborn Child. Tradition says that, to express their joy, they brought with them rural musical instruments, including a bagpipe. The shepherd who carries it here seems transfixed by the great star in the sky. The ox also looks up at it while the ass gazes at the Child.

Notice that the figures participate to an extraordinary degree in a broad geometric design, unprecedented in French painting at the time. Even the shepherd’s pointing gesture is part of this pattern. From it the two conical mountains ascend and diverge, creating a strong centripetal counterforce.