Tag Archive for: Flight to Egypt

Painting of the journey to Egypt 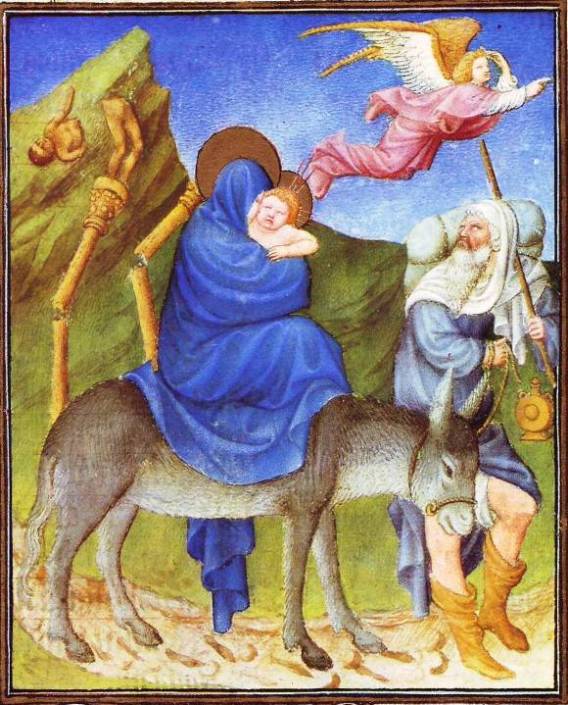 Warned by Joseph’s dream that King Herod was preparing to kill the Christ Child the Holy Family ﬂed to Egypt.

The painter of the Duc de Berry’s Book of Hours wanted to make this episode the basis for a new sort of depiction of the Holy Family. He seems to have admired the fresco of the Flight in the Arena Chapel, which he might recently have seen. He himself was seeking greater movement and luminosity, not to mention a more intimate view of the world. 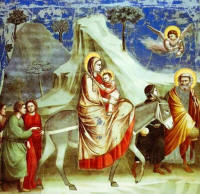 Notice how he showed the prints of hoofs and feet in the dust of the road. This was an innovation, and typical of a Northern artist. Notice too the averted face of Mary in the Book of Hours painting, something else that was new. It allowed the artist to show mother and son close, but also to give special prominence to the child.

It suggested to him also the possibility of a corresponding rotation of Joseph. The two turning figures are so powerful in their interrelated movement that they bring to mind later contraposto in the work of Donatello or Quercia.

The donkey appears especially quiet and meek. His soft hair is lighted, it seems, chieﬂy by reﬂection from the road. The Virgin is a broad, heavy ﬁgure, and the artist, feeling she needed more support than the little grey ass could give her, extended her mantle below it to serve as a vertical buttress. Notice the shattered pagan idols behind Mary. The mere passing of the Holy Family has caused these figures to collapse and fall.

This painting of the Flight has a masterful simplicity and harmonious colors of tan, gold, pale green, violet, and blue.