Christ taken down from the cross 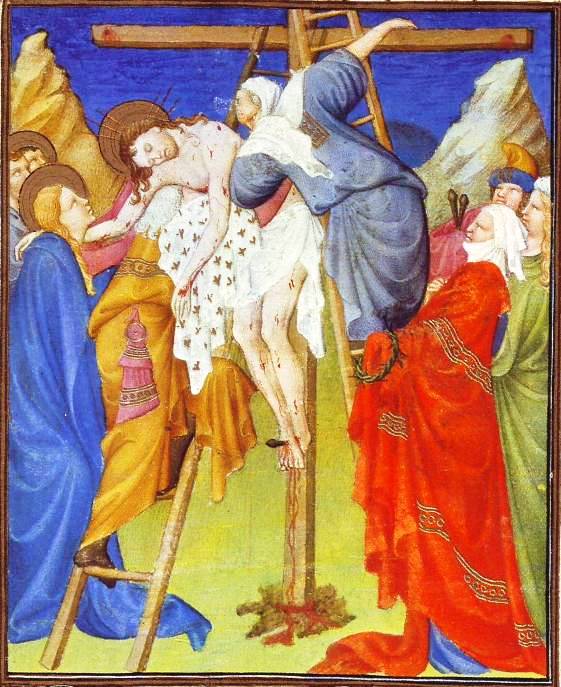 Jesus returned to the arms of his mother

‘And now when the evening was come . . . Joseph of Arimathaea, an honourable counsellor, who also waits for the kingdom of God, came, and went in boldly to Pilate and begged for the body of Jesus . . . And he bought ﬁne linen and took him down’ (Mark 15: 42-46).

As usual in representations of the Deposition, the feet of Christ are still fastened to the cross while the body is lowered. You might think this would have been done the other way round, but to loosen the feet first would have meant the wrists/hands would have had to support the full weight of Jesus’ body, and presumably the flesh of his hands would have been torn apart. Instead Joseph of Arimathaea, on the lower rungs of his ladder, supports the corpse from below and Nicodemus, higher up, holds fast to the transverse beam while steadying the corpse with his left arm. In this way the battered body can be gently lowered into the waiting arms of his mother and friends.

The mantle that covered the Virgin’s head in earlier scenes has fallen back, and the very youthful mother (in fact she must have been about 46-8 years old) looks up tenderly and reaches out to receive her son, whose right arm has fallen limply upon her shoulder.

On the opposite side a red-robed woman (Mary Magdalene?) wearing a white wimple and a striking scarlet and gold mantle, holds the Crown of Thorns in her reverently covered hand. She is accompanied by another woman (Mary Cleophas?) in a green cloak and a young man who brandishes the two nails. At the extreme left of the painting, John stands gazing at his dead friend and master.

The ﬁgures compose a beautiful arabesque, strengthened by the ladders, the cross, and the twin peaks in the distance. The artist modulates surfaces subtly, giving them the kind of polish we observed in the Agony. A greater sensitivity is apparent also in the ﬁgures, especially the Virgin Mary.

Jesus Taken Down From the Cross