Tag Archive for: About Nazareth

Why is Nazareth famous?

Nazareth is famous for one thing, and one thing only: it is the home town of Jesus.
It was here that Jesus spent his boyhood, living with his mother and father, and here that he faced the sceptical townsfolk of Nazareth.

The village seems to have been held in some contempt in 1st century Palestine. It was a nondescript dot on the map with not much to offer, overshadowed by nearby Sepphoris, the luxurious Greek-style capital of Herod Antipas. It is beguiling to think that Joseph and Jesus, as builders, may have traipsed over to Sepphoris to work on the new buildings. 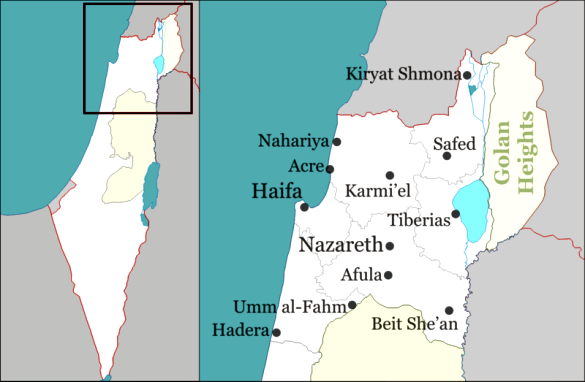 Nazareth was small. We know this because of the discovery of underground tombs. These were chiseled into the soft limestone bedrock, and their position shows the limits of the village’s perimeter to the west, east, and south, since burial was always done outside inhabited areas. It would have been 2,000 feet at its greatest east-west length and around 650 feet at its greatest north-south width, though the actual area inhabited in the first century was much less, perhaps only around ten acres. Steep ravines and ancient terraces on the northern slope confined the oval-shaped settlement.

The people of Nazareth were essentially farmers, so they needed space between the houses for livestock and their enclosures, as well as land for plants and orchards.
Nazareth would have had a population of around two to four hundred in antiquity, that is to say, several extended families or clans. 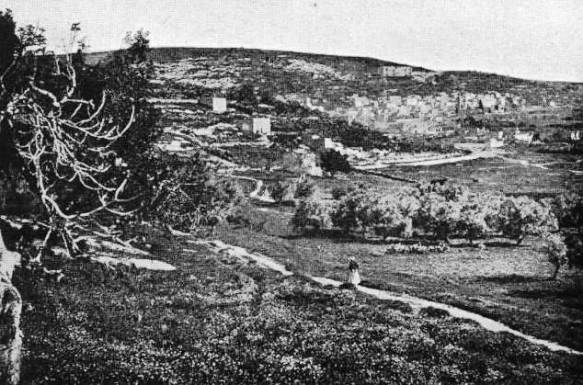 The village of Nazareth in the 19th century

The tombs surrounding Nazareth were also very modest. Each of them was typically Jewish. The body was first buried in a body-length shaft cut at right angles into the walls of the tomb chamber, sealed with a large stone rolled into place. When the flesh had decayed, the remaining bones were gathered together and usually placed in an ossuary or bone box.

Ritual bathing pools or mikveh were also found at Nazareth. Used for ritual-purity immersion, they were found at virtually every Jewish site in Galilee, the Golan, and Judea.

The little village of Nazareth, off the main road, over the hill but still within walking distance of the city of Sepphoris, was Jesus’ home. The peasant families who lived there eked out a living, paid their taxes, and tried to live in peace. They were observant Jews, so they circumcised their sons, celebrated Passover, did not work on the Sabbath, travelled as pilgrims to Jerusalem, and valued the traditions of Moses and the prophets. 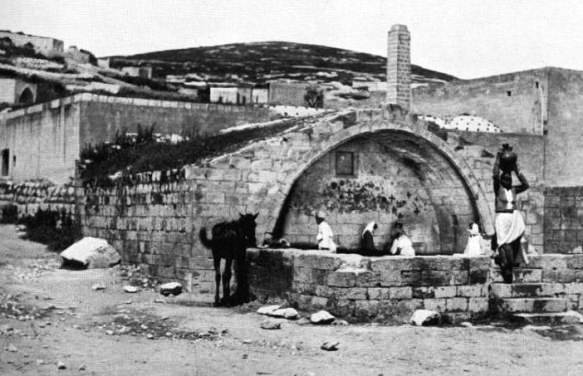 The Nazareth fountain, a link to Jesus, 1894 photograph

The only feature in the present-day town of Nazareth that can be linked directly to Jesus is the well. The actual structure is probably later, but we can stand in front of it and know that in that spot Mary once hauled water each day for her family’s needs. 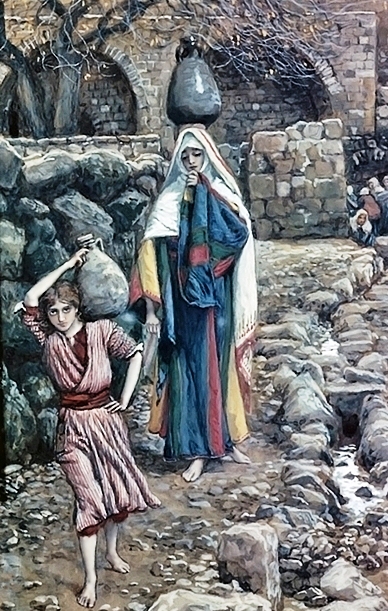 This event was depicted in James Tissot’s ‘Jesus and His Mother at the Fountain’ (above) — though it is historically unlikely that a grown boy would have taken part in what was seen in 1st century Palestine as women’s work.