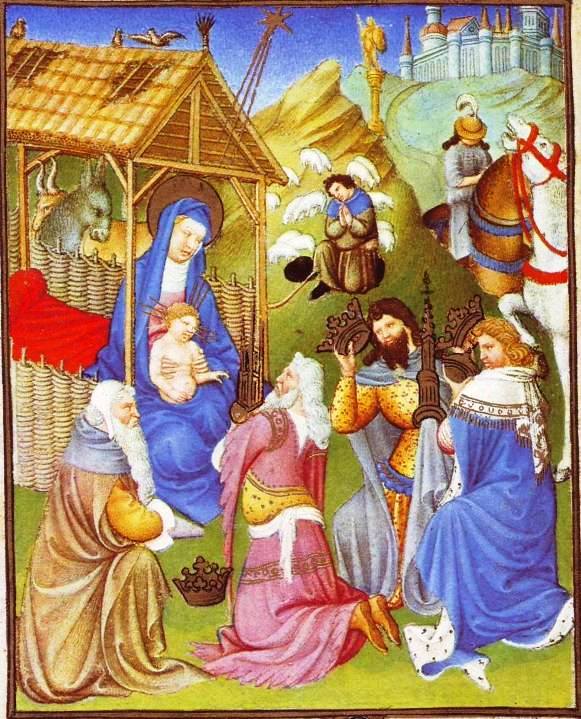 The Three Kings, or Magi (wise, learned men), led by the star to the Christ Child, kneel to present their gifts. Matthew refers to them laconically as ”wise men from the East” but already in the early centuries of the Church they were spoken of as kings and their number was fixed at three, perhaps because of their triple offering of gold, frankincense and myrrh.

Under their traditional names, Melchior, Gaspar, and Balthasar, they came to reprepresent not only the homage of the Gentile world to Christ but the three ages of man. 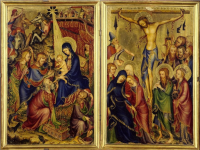 Melchior has as usual laid aside his crown, but Gaspar and Balthasar are also doffing theirs, a gesture for which the only precedent appears to be a somewhat earlier diptych (an object with two flat plates joined by a hinge), probably of Netherlandish origin, now in the Bargello in Florence. Click on the image at right to see this painting.

There, too, as in Italian paintings, horses from the royal train appear in the background, although none quite like the gray charger throwing back his head, to neigh perhaps, in recognition of the miraculous star. Nearby a shepherd kneels in adoration.

The Virgin in her humble shelter was seated on the ground in the artist’s miniature for the Nativity (see this painting at Birth of Jesus), but now the painter has provided her with a bed covered in royal scarlet. A massive figure, larger in scale than the others, she holds on her lap a sturdy curly-headed Child Jesus, naked except for the mantle she has tucked about his legs.

Joseph, the carpenter, kneels facing Melchior. The two men are similar in age and mien, but the King is dressed in rose and saffron decorated with gold whereas Joseph wears a subdued brown and violet mantle, beautifully set off by a mustard-yellow tunic. His head is covered only by a white skull cap; he, like the kings, has removed his hat/crown in a gesture of respect for the King of Kings.

On the hill by the road leading down from Jerusalem a golden statue of Mars stands on a column, representing the pagan world and the military domination of Rome. Of course, this is inaccurate: the Jewish religion forbade images of God/gods, and the Roman authorities respected this. If there had been a statue of Mars on the Jerusalem road, all hell would have broken loose…