Who was Joseph of Nazareth?

What do we know about Joseph of Nazareth?

Very little, really. But we can piece together bits and pieces. We know, for example that he was:

It’s frustrating. We know a lot about John the Baptist:

In the case of Joseph we know not a single one of these things. What we do know is some of the places where he lived, the things he saw, and a little of what he thought and felt.

Where do we get our information? 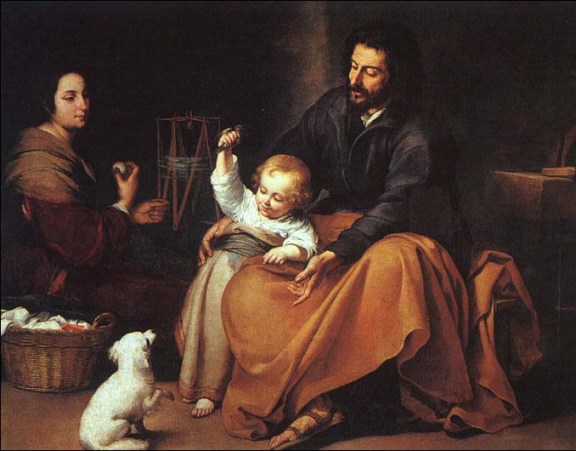 We have heard of Nazareth so often that it has become almost mythic, but the Nazareth where Joseph lived and worked was as real then as it is today.

The Plain swarms with historical memories: of Elijah and the priests of Baal, of Gideon and the Midianites, of the tragic King Saul and the Philistines.

This one spot has been the battleground of nations from the dawn of history, even down to the time of Napoleon –  his comment was that no plain he had ever seen was more suitable for a large-scale battle!

This is the landscape Joseph & Jesus knew

In shape the Plain of Esdraelon is a triangle, and the northern side, running east and west, is formed by the southern edge of the hills of Galilee, which drop sharply into the plain.

About midway in the line of hills a narrow valley cuts in, rises steeply, and opens out into a high, flat basin. Here in this upland valley, 1160 feet above the sea, Nazareth lies.

From the hills on which Nazareth is built you can look, as Joseph once looked, over the whole land from snow-clad Hermon in the north to the hills of Judea in the south, and from the mountains of Gilead across the Jordan to the waters of the Mediterranean. You are looking at the same land Joseph – and his adopted son Jesus – looked at… 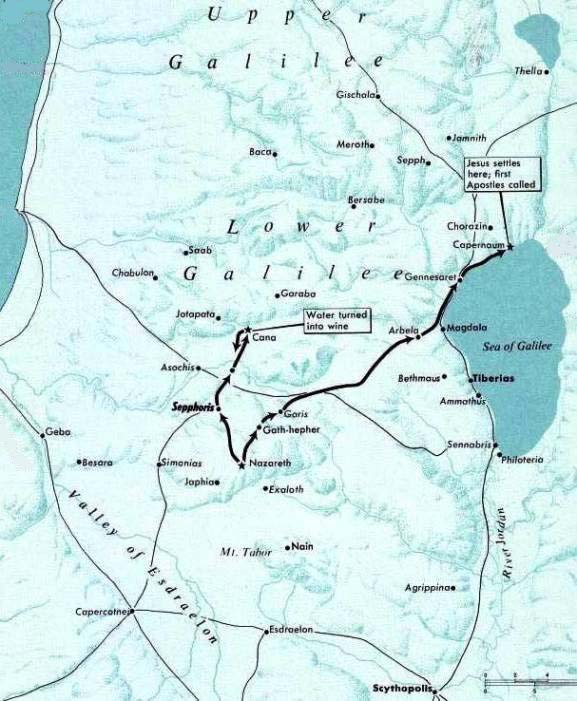 Map of Nazareth and the surrounding countryside of Galilee

Nazareth was not an obscure, out-of-the- way-place. It is always called a town or city in the Gospels, and important trade routes passed nearby.

We must not picture Joseph and his little family as living in an isolated village.

What happened at Bethlehem?

But Jesus, as we know, was born in Bethlehem, not Nazareth. You might look at The Birth of Jesus to see why this was so.

There is no need to retell the well-known story of what happened when Joseph at length reached Bethlehem. The inn was full. The best they could get was a stable, a rough shelter for beasts.

There Jesus was born.

Meanwhile, in one of the valleys close by (Bethlehem lies on a hill) the shepherds heard the angels’ message, and were given the strange sign by which they were to recognise him who had been foretold as ‘wonderful cousellor, God the mighty’ (Isaiah 9:6) – an infant wrapped in swaddling bands and laid in a manger.

‘They came with haste, and they found Mary and Joseph, and the infant lying in the manger.’

Luke’s gospel tells us that Mary stored up in her heart all she saw and heard on that night.

We can suppose that the same was true of Joseph.

What did Joseph do?

Eight days later he exercised the authority of a father: he circumcised the child, and gave him his name.

When forty days had passed Mary and Joseph travelled the six miles northward to Jerusalem to carry out a twofold prescription of the law.

The first-born male child of every Jewish family belonged to God, and had to be bought back with five shekels.

What did Mary do?

On the same occasion the mother underwent legal purification and offered a lamb. Those who could not afford a lamb, however, offered two doves instead.

Mary and Joseph came like other pious Jews to carry out what the law prescribed.

Presentation in the Jerusalem Temple 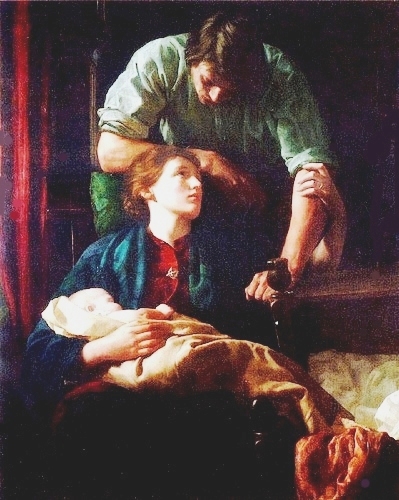 We learn from this portion of the Gospel that Joseph was a poor man, for Mary made the offering of the poor.

Luke’s gospel tells the story of what followed: how Simeon

Then, while Mary and Joseph were filled with astonishment at his words, he turned to them and blessed them, as well he might; if he was so highly favored in seeing the Promised One, how blessed was the family into which this Promised One had been born!

Joseph and Mary in Egypt

After the visit of the Magi, Joseph was warned in a dream to take the child and his mother and flee to Egypt, and stay there till he was told to return. Soon Herod would be seeking the child’s life.

And so, while the Magi stole away eastward, avoiding Jerusalem, Joseph took the road to Egypt. He would have known there was a large Jewish community in the Nile Delta area.

Once beyond the boundary of the Holy Land the little party was comparatively safe, and the rest of the journey could be made with less haste. Joseph would almost certainly have joined some small caravan for greater security. Travelling alone was dangerous. 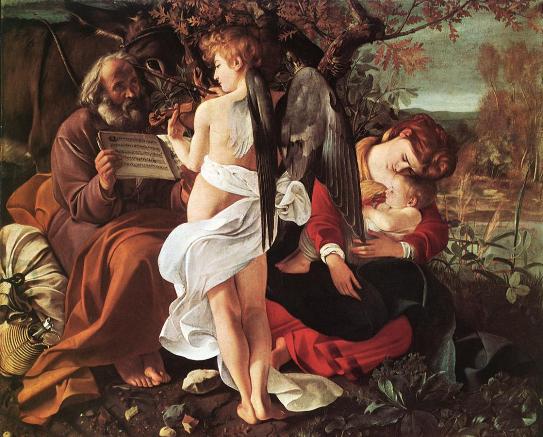 Joseph hears the voice on an angel in the music he listens to: Caravaggio’s symbol of a heavenly message. Mary and the baby Jesus fall into an exhausted sleep.

As Joseph followed the desert route to Egypt and looked at the child asleep in his mother’s arms, he could not foresee an incident in that child’s later life when another storm would rage around him, and threaten to destroy him and his companions while he slept. On that occasion, with just a word, Jesus would quiet the stormy waters of the Lake of Galilee.

Not now. Behind them the blood of the Innocents flowed and their mothers’ cries rose to heaven. It was left to Joseph to guide Mary and her child to safety.

Note: We have only one ﬁxed date in the course of all these events, the death of Herod in 4 B.C. Then it was that Joseph was told to return to his own land.
We do not know with certainty the year of Our Lord’s birth but the date most favored is 6 B.C. 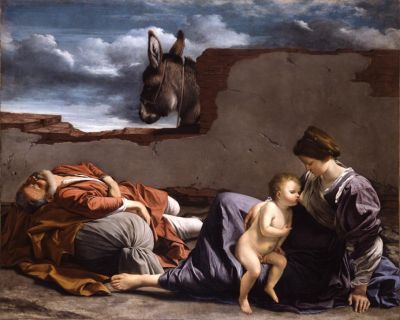 When Herod died, once again the angel spoke to Joseph in his sleep, and Joseph left Egypt, its temples and its pyramids, and set out for Palestine.

The journey from Egypt to Palestine and up along the coast to near Caesarea, the seat of Roman government, then across a pass in the Carmel range to Nazareth would be about 320 miles, a long distance to bring a boy of some two years old.

It must have been with feelings of satisfaction that Mary and Joseph reached the familiar scenes of fertile Galilee and made their way up the steep road on its northern side which led into the pocket in the hills where Nazareth lay.

The rest of St. Joseph’s life, so far as we know, was spent at Nazareth. There are only four things known about his life during this period: 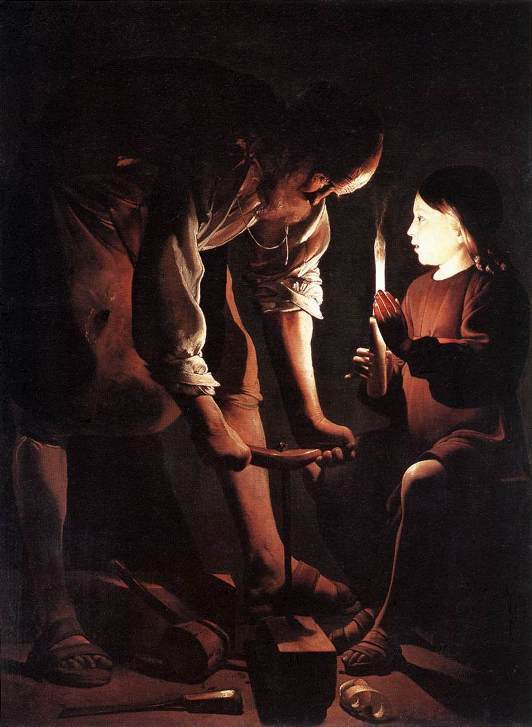 The only direct testimony we have in the Gospel about the sort of man Joseph was is that ‘Joseph her husband was a just man‘.

They are few words, but full of meaning.

What lessons can we learn from Joseph?

Joseph’s life was a humdrum one, accompanied by sorrow, hardship, disappointment, and monotonous work. There was very little glamour in Nazareth. We get a picture of a silent man who carried out God’s will through obedience, amid trials, by faith, in obscurity.

We are told nothing about his private life or thoughts, no personal details about his birth, upbringing, or death.

He was not exempt from sorrow and suffering. The very first incident related of him in the Gospel shows him faced with a terrible perplexity which must almost have torn his heart in two.

And the last scene in which he appears shows him wandering about Jerusalem in bitter sorrow.

Joseph’s were the trials that anybody has to suffer at one time or another.

What can Joseph teach us?