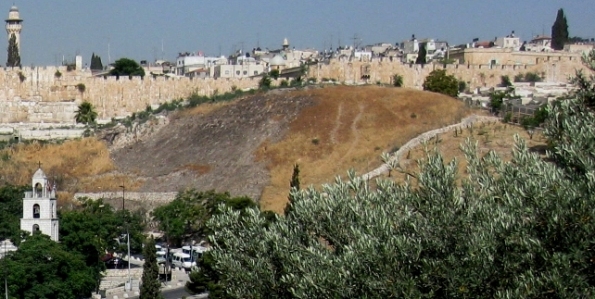 On the day of his death, Jesus was tormented and mocked by onlookers at Golgotha, place of the Skull. Then he was crucified with two condemned thieves, an especially humiliating death.

Who was at the foot of the cross?

There were a number of Jesus’ friends on Calvary that day. These included a group of loyal women who supported him (financially and as disciples) from the early days of his ministry in Galilee. Mary Magdalene seems to have been their leader, but there were as well some Galilean women who would live to tell his story in the coming years. These loyal followers watched silently, never leaving him until the end came.

John’s gospel is the only one to tell us of the presence of Mary, mother of Jesus, who seems to have been widowed and would have been in her early 40’s.

Why were there so many named women and no apostles except John? It was far less dangerous for them to be there. The women were no threat to the soldiers. The male disciples, on the other hand, were hunted men, viewed by Roman and Jewish authorities as accessories/supporters of Jesus.

There were other people there, not so sympathetic: 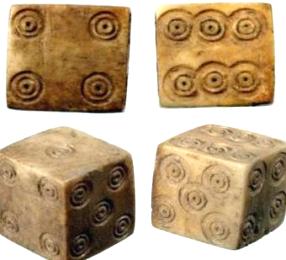 There were probably four soldiers in the execution squad, half the basic unit of the Roman army – eight soldiers formed a unit known as the contubernium.

Blind to Jesus’ majesty, they vied for the clothing of the man they crucified – it was one of the perks of their job. They were oblivious to the nobility of Jesus, to the fact that this tortured man had atoned for the sins of the world, including theirs.

While he prayed for them, they cast lots for the different items of his clothing. A little gambling would pass the time. 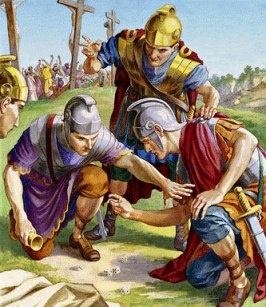 They took his belt, sandals, outer garment and undergarment. There was a squabble over Jesus’ tunic which was woven all in one piece –  probably a gift from a woman disciple or even his mother. The Jewish historian Josephus tells us that the High Priest wore a similar garment:

‘Now this garment was not made of two pieces, nor sewed together upon the shoulders and the sides, but was one long vestment so woven as to have an aperture for the neck. A border also was sewed to it; it was also parted where the hands were to come out.’ Antiquities 3:161

The mockery of the soldiers and people around the cross was the final indignity heaped on Jesus. It came from three sources: 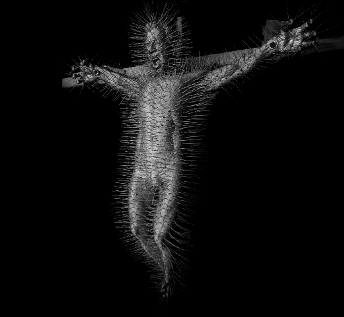 When Jesus first arrived at the place of execution, someone offered him a drink of wine mixed with myrrh. This was a narcotic that was said to relieve pain. Offering it to a condemned man was a charitable act.

But Jesus did not drink it. The gospels do not tell us why.

Later, the soldiers offered him sour wine. Again he refused it, even though he had lost so much blood his thirst must have been terrible.

Two other men were crucified with Jesus, presumably also for treason.

They are often called ‘the two thieves’, but the word used to describe them means something quite different to our modern word ‘thief’. The Jewish historian Josephus used the same word to describe the Zealots, who aimed for the violent overthrow of the authorities, and were terrorists: their favorite weapon was a dagger, which they used to stab important public figures as they moved through a crowd.

The two men beside Jesus were not petty thieves but violent criminals. They may have been connected to the insurrection Barabbas led (Mark 15:7).

One of them was not so hardened. Like Pilate he recognised the innocence of Jesus, and Jesus responded, offering him a place in heaven that very day. 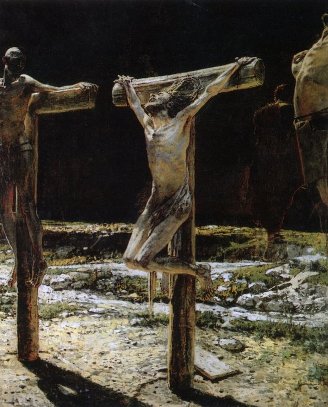 The final words of Jesus

Jesus is said to have uttered three sentences before he died:

Then he bowed his head (a detail that must have come from an eyewitness) and died.

Even in death, Jesus remained true to himself. At the end, God is his Father and refuge, the one from whom he seeks answers.

What happened next? See Jesus dies 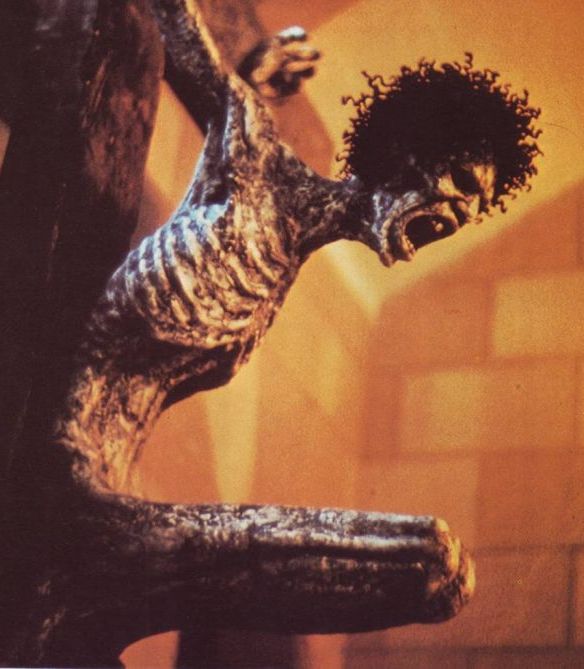 Matthew 27:33-44 33 And when they came to a place called Golgotha (which means Place of a Skull), 34 they offered him wine to drink, mixed with gall; but when he tasted it, he would not drink it. 35 And when they had crucified him, they divided his clothes among themselves by casting lots; 36 then they sat down there and kept watch over him. 37 Over his head they put the charge against him, which read, ‘This is Jesus, the King of the Jews.’ 38 Then two bandits were crucified with him, one on his right an one on his left. 39 Those who passed by derided him, shaking their heads 40 and saying, ‘You who would destroy the temple and build it in three days, save yourself! If you are the Son of God, come down from the cross.’ 41 In the same way the chief priests also, along with the scribes and elders, were mocking him, saying 42 ‘He saved others; he cannot save himself. He is the King of Israel; let him come down from the cross now and we will believe in him. 43 He trusts in God; let God deliver him now, if he wants to; for he said, ‘I am God’s Son.’ 44 The bandits who were crucified with him also taunted him in the same say.

Mark 15:21-32 21 And they compelled a passer-by, Simon of Cyrene, who was coming in from the country, the father of Alexander and Rufus, to carry his cross. 22 And they brought him to the place called Golgotha (which means the place of a skull). 23 And they offered him wine mingled with myrrh; but he did not take it. 24 And they crucified him, and divided his garments among them, casting lots for them, to decide what each should take. 25 And it was the third hour, when they crucified him. 26 And the inscription of the charge against him read, “The King of the Jews.” 27 And with him they crucified two robbers, one on his right and one on his left. 28 * [No text] 29 And those who passed by derided him, wagging their heads, and saying, “Aha! You who would destroy the temple and build it in three days, 30 save yourself, and come down from the cross!” 31 So also the chief priests mocked him to one another with the scribes, saying, “He saved others; he cannot save himself. 32 Let the Christ, the King of Israel, come down now from the cross, that we may see and believe.” Those who were crucified with him also reviled him.

Luke 23:32-43 32 Two others also, who were criminals, were led away to be put to death with him. 33 And when they came to the place which is called The Skull, there they crucified him, and the criminals, one on the right and one on the left. 34 And Jesus said, “Father, forgive them; for they know not what they do.” And they cast lots to divide his garments. 35 And the people stood by, watching; but the rulers scoffed at him, saying, “He saved others; let him save himself, if he is the Christ of God, his Chosen One!” 36 The soldiers also mocked him, coming up and offering him vinegar, 37 and saying, “If you are the King of the Jews, save yourself!” 38 There was also an inscription over him, “This is the King of the Jews.” 39 One of the criminals who were hanged railed at him, saying, “Are you not the Christ? Save yourself and us!” 40 But the other rebuked him, saying, “Do you not fear God, since you are under the same sentence of condemnation? 41 And we indeed justly; for we are receiving the due reward of our deeds; but this man has done nothing wrong.” 42 And he said, “Jesus, remember me when you come into your kingdom.” 43 And he said to him, “Truly, I say to you, today you will be with me in Paradise.”

John 19:17-30 17 So they took Jesus, and he went out, bearing his own cross, to the place called the place of a skull, which is called in Hebrew Golgotha. 18 There they crucified him, and with him two others, one on either side, and Jesus between them. 19 Pilate also wrote a title and put it on the cross; it read, “Jesus of Nazareth, the King of the Jews.” 20 Many of the Jews read this title, for the place where Jesus was crucified was near the city; and it was written in Hebrew, in Latin, and in Greek. 21 The chief priests of the Jews then said to Pilate, “Do not write, ‘The King of the Jews,’ but, ‘This man said, I am King of the Jews.'” 22 Pilate answered, “What I have written I have written.” 23 When the soldiers had crucified Jesus they took his garments and made four parts, one for each soldier; also his tunic. But the tunic was without seam, woven from top to bottom; 24 so they said to one another, “Let us not tear it, but cast lots for it to see whose it shall be.” This was to fulfil the scripture, “They parted my garments among them, and for my clothing they cast lots.” 25 So the soldiers did this.